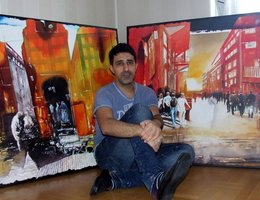 Kourosh started painting in Tehran, where he studied art at Zangar art institute under guidance of professor Aydin Aghdashloo, an Iranian well known artist and art critic. His success within art was fast and he had his first solo exhibition at the age of eighteen which made him rapidly recognized as one of the youngest professional artists in the country. After numerous group exhibitions and three successful solo exhibitions he decided to develop his artistic career within Graphic design. His interest to fine literature motivates him to start working with publications as an illustrator of book covers. The result of this cooperating was hundreds of illustrations for books. He also as a part time job wrote about contemporary visual art at Iran newspaper and some other art magazines and established his name as an art critic by writing about contemporary art movements, interviewing artists and translating articles.

Kourosh moved to Sweden in 2006, where he has been living and working since then. The experience of immigration influenced his art in high degree, he succeed quickly to connect art galleries and showed his art all around Sweden of which all were sell-out. 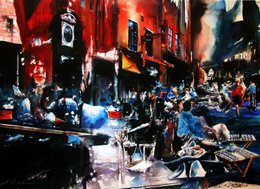 This painting of kourosh Safinia has been chosen for North Light Books’ second annual Best of Acrylic competition AcrylicWorks 2.

Congratulations to the 116 artists chosen for North Light Books’ second annual Best of Acrylic competition AcrylicWorks 2: Radical Breakthroughs! If you see your name below, please check your email accounts (and junk boxes) for instructions on next steps. You should receive an email from us with the subject line “AcrylicWorks 2 Winner Notification” by Wednesday, May 14th.